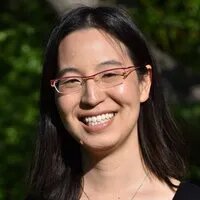 Evelyn Tanaka (she/her) is an environmental activist born and raised in Treaty 7 Moh’kinsstis (Calgary). As a child she wanted to be just like Jane Goodall because she loved the biodiversity of the African savannah. Her love of nature translated into a BSc in Ecology (2003) and an MA in Anthropology/Primatology (2006) from the University of Calgary. She has also spent extended periods of time in five African countries – Madagascar, Kenya, Ghana, Burkina Faso and Mali.

Evelyn’s priorities as Culture, Multiculturalism and Status of Women Critic are to empower a new generation of young and diverse leaders including BIPOC women, trans men and women, and non-binary citizens of Alberta. Evelyn is actively reaching out to unrepresented and marginalized people across Alberta to let them know that the Green Party of Alberta is a safe and inclusive place for their values and their voices.

Evelyn is a leader in the environmental sector and has helped transitioning auto workers and newcomers to Canada find work in the green economy. She has worked in the renewable energy sector with rural communities all over Alberta. She also ran as a Green Party of Canada candidate in the riding of Calgary Shepard in the 2019 federal election. On a community level Evelyn enjoys creating inviting spaces for neighbours to connect through her book club, music jam group, knitting club, neighbourhood potlucks, and annual camping trip.

She lives in McKenzie Towne in an eco-friendly solar-powered house with her husband, their two sons, and dog Molly.

Send a message to Evelyn Tanaka