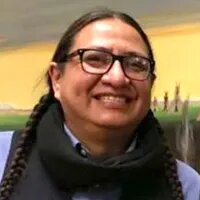 Desmond G. Bull is an elected Councillor for the Louis Bull Tribe of the Maskwacis nation in the Treaty 6 Territory of Alberta and the GPA Candidate of Record for Maskwacis-Wetaskiwin.

Desmond began working in the field of education for Maskwacis in 2002, and continued till 2013. Desmond has successfully completed the Aboriginal Leadership, Governance and Management at the Banff Art Centre in 2012. With these tools Desmond campaigned and was elected to his first term for the community of Louis Bull Tribe. Desmond has now been re-elected twice and sits on various boards, panels, committees, advisories on local, provincial and national levels.

As a first nation member, elected official and an environmental steward: Desmond began to research and started to develop initiatives for PV systems (Solar) to be installed on public buildings. Desmond successfully spearheaded the installations of 188 Kwh of PV (solar) on 8 public buildings by trained band members. This initiative is 100% owned by the tribe and fully funded through grants/subsidies, infrastructure development, sponsorship and fundraising. Through his work in the renewable sector, Desmond has collaborated with: The Green Economy Network in Edmonton, Energy Futures Lab of Alberta, The Alberta Energy Efficiency Advisory Panel, Alberta Solar Energy Society, Aboriginal Climate Action Team, Iron and Earth and the 20/20 Catalysts program.

As the new Indigenous Relations Critic, Desmond continues his work to empower his community, first nations and the environment. Desmond believes that partnerships can be created in communities with local municipalities and first nations to develop community owned public transportation services, agriculture/livestock programs and renewable energy infrastructure.

Send a message to Desmond Bull